Scarica il 0 sottotitoli in italiano per The man who wouldnt die.it 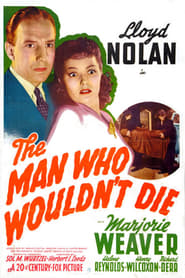 In the shadows of the night Dudley Wolff (Paul Harvey), his secretary Alfred Dunning (Robert Emmett Keane), and his doctor, Haggard (Henry Wilcoxon), bury a body in the estate cemetery. At the house, Wolff's daughter Catherine (Marjorie Weaver) arrives unexpectedly and tells her step-mother Anne Wolff (Helene Reynolds that she has just been married to Roger Blake (Richard Derr) who will be along in a few days. Cathy retires and is awakened by a mysterious assailant who fires a shot at her, but her parents tell her she was just dreaming. Wolff goes to the cemetery and finds the body missing. The scared Cathy calls in fast-talking private detective Mike Shayne (Lloyd Nolan) and, since her father doesn't like detectives, she introduces him as her husband. That evening Shayne hears a shot and finds that Haggard has been killed. While the police are questioning the family, the lights go out and a shot is fired from outside.